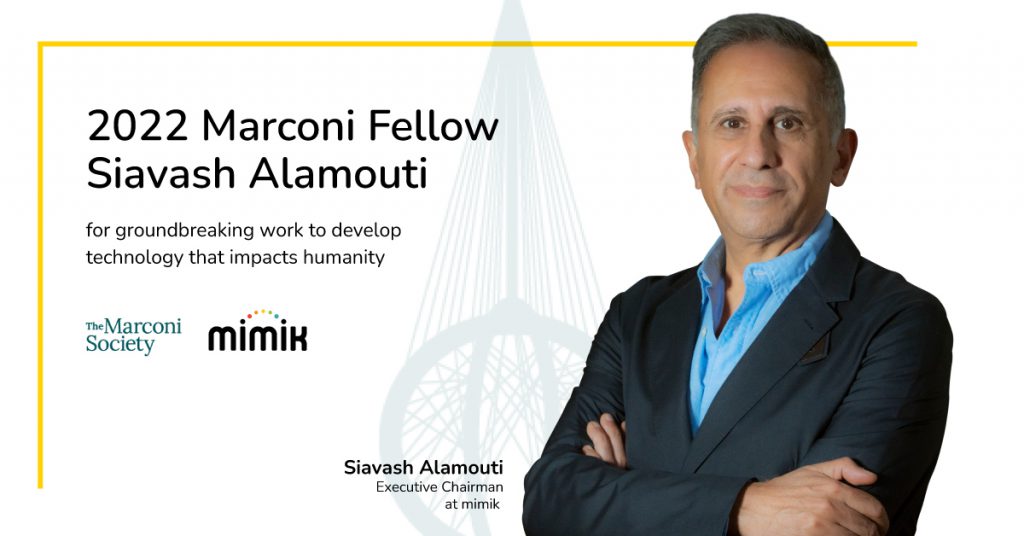 Oakland, CA, February 9, 2022: mimik Technology, Inc., a pioneer in hybrid edge cloud technology and business solutions, today announced that Siavash Alamouti, Co-Founder and Executive Chairman of the Board and former President and CEO of mimik, has been awarded the prestigious 2022 Marconi Prize in recognition of his contribution to global wireless device accessibility. The outspoken innovator, who is most well known as the inventor of the Alamouti Code, has dedicated his career to developing and promoting technologies that enhance people’s lives. His namesake invention underpins modern wireless technology standards and can be found in billions of devices around the world.

Granted annually by the Marconi Society, the Marconi Prize is often referred to as the “Nobel Prize for Communications” and recognizes the contributions and impact of innovators in the communications industry. He joins other technology luminaries and distinguished Marconi Fellows such as Vint Cerf, regarded as one of the creators of the internet for the invention of the TCP/IP protocol; Marty Cooper, inventor of the cellphone and the first person to make a public handheld cellular phone call; and Google co-founders Sergei Brin and Larry Page, who invented the Page Rank Algorithm and built the primary search engine for the internet.

“It is incredibly humbling to be recognized by the Marconi Society, whose mission and values have been a guiding light for my efforts to democratize the internet and provide equal access to information to every single individual globally,” said Alamouti. “I am honored to be included in such distinguished company. I would like to thank the Marconi Society for making digital equity a driving force behind its mission. We have a long way to go to make the internet available to every child and adult across the globe, and an even more challenging path to ensure that the internet does not become a channel for the spread of disinformation, conspiracy theories, and propaganda.

“To protect our futures, we need to look at every aspect of the ecosystem including technology, the business model, and regulations to ensure that people can easily distinguish facts and actualities from beliefs and propaganda. Regardless, I have learned that there are no challenges that cannot be overcome by exploration, experimentation, and hard work. I look forward to collaborating with the Marconi Fellows to explore creative ways to ensure a future internet that is sustainable, equitable, private, secure, and fuels a thriving digital economy,” concluded Alamouti.

The Alamouti Code, which Alamouti developed in 1996, optimizes mobile signal reception via transmitters that are found in cellular base stations or access points. This eliminates the need to add more receivers to wireless devices, which keeps costs, size, and the carbon footprint down. The code now serves as the foundation for multiple-input multiple-output (MIMO) technology, which is a key component of today’s wireless standards. Alamouti’s work in this area has been cited more than 20,000 times in global scientific research.

Over the course of his career, Alamouti has held positions at major technology companies such as AT&T, Intel, and Vodafone. During this time, he has advocated on behalf of people across the globe and has been a strong voice for open wireless standards and technology. His leadership in this area is reflected in his contributions to global telecommunication and internet standards and spectrum policy reform.

“Siavash has brought connectivity to billions of people by making wireless devices more efficient and affordable without reducing reception quality,” said Vint Cerf, Chair of the Marconi Society and 1998 Marconi Fellow. “Throughout his career, he has been a vital advocate for technology as a democratizing force in the world.”

In keeping with his passion for accessible and responsible internet usage, Alamouti has recently expanded his focus to include edge cloud computing, cloud decentralization, and data sovereignty. He joined mimik in 2014, where he helped create and commercially deploy the industry’s first hybrid edge cloud platform. He passed the CEO responsibility to the founder Fay Arjomandi in 2020 so that he could focus on the business and financial models of the internet, specifically the protection of data sovereignty and digital assets. He continues to play an active role as the company’s Executive Chairman and is now focused on creating a platform to protect people’s data and to help them manage and monetize this valuable asset.

mimik’s hybrid edgeCloud platform transforms cloud applications from a fixed client-server architecture—where server functionality is limited to servers in data centers and gateways—to a fully distributed architecture, enabling billions of smart client devices to act as servers and delivering nearly endless scalability. The mimik platform enables heterogenous applications, processes, and devices to autonomously communicate in clusters on the edge regardless of their operating system or network. Because data is processed at the edge, mimik’s platform requires significantly less bandwidth and power, reduces cloud hosting costs, is more resilient than traditional client-server architecture, and offers much higher levels of data privacy and security.

“Siavash is an industry gem who has contributed greatly to the advancement of wireless technology and access to the internet around the world. We are honored to work with him. I remember the day I met him in 2010 at Vodafone to pitch my idea for a decentralized internet that focused on bringing control of data to their rightful owners,” said mimik Founder and CEO Fay Arjomandi. “He supported me in that journey from the beginning and in 2014, he agreed to help me as the CEO of mimik, investing in the company and forgoing a salary. This was at a time when the edge cloud was a completely disruptive approach not yet on the radar of VCs. I feel fortunate to have found a co-founder who shared my vision and passion for humanity and the use of technology for social progress. This is a well-deserved distinction that underscores the importance of creating and championing technology that is applied for the greater good.”

mimik has pioneered hybrid edge cloud computing to enable any computing device to act as a cloud server to help app developers unlock the next generation of apps for the hyper-connected world. The platform includes a run-time engine for developers to develop and host microservices on all kinds of end-user devices such as smartphones, smart IoT devices, and AI-based sensors. The engine is agnostic to OS, device, networks, and public/private cloud. It is non-proprietary and works with existing standard development tools and language. mimik also provides ready-to-deploy application domain SaaS (cloud and/or edge) for a wide range of industry verticals including fintech. The mimik platform enables an edge-in versus a cloud-out approach to build applications faster and drastically reduce infrastructure cost, minimize latency, improve security and data privacy, and enable direct app-to-app communication via the standard RESTful API first and serverless microservice-driven architecture. For more information visit: https://mimik.com and https://developer.mimik.com.