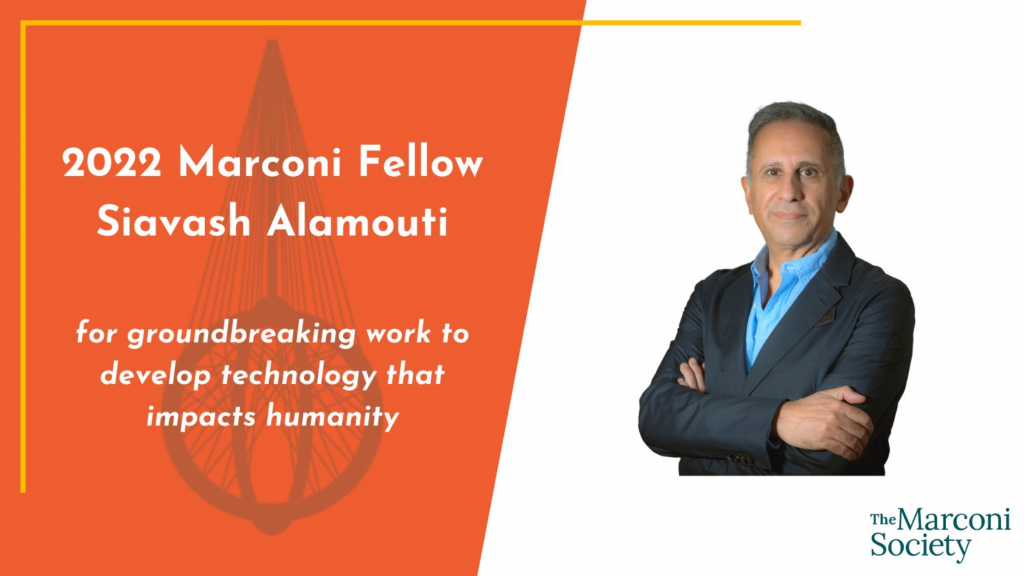 The Marconi Society today announced its 2022 Marconi Fellow, a wireless innovator whose personal story informs his perspective on technology working for humanity.

February 9, 2022—The Marconi Society is proud to award the 2022 Marconi Prize, the top honor in communications technology, to Siavash Alamouti in recognition of his impact on the accessibility of wireless devices. The serial innovator, whose famous Alamouti Code can be found in billions of devices around the world, has devoted his career to developing wireless technology that improves people’s lives.

“Siavash has brought connectivity to billions of people by making wireless devices more efficient and affordable without reducing reception quality,” says Vint Cerf, Chair of the Marconi Society and 1998 Marconi Fellow. “Throughout his career, he has been a vital advocate for technology as a democratizing force in the world.”

Alamouti designed his eponymous Code in 1996, refining past efforts to improve mobile signal reception without significantly increasing device costs. His elegant solution, mathematically proven to optimize reception, adds transmitters to cell base stations or access points rather than adding them to each device. This code is now part of the foundation of multiple-input multiple-output (MIMO) technology, which is an essential component of contemporary wireless standards.

More recently, Alamouti has become an outspoken advocate for the decentralization of the cloud and data sovereignty. As co-founder, former CEO, and executive chairman of mimik, he has helped create and commercially deploy the industry’s first hybrid edge cloud platform that allows consumers to control how their data is stored, shared, and monetized. He worked for Wells Fargo bank as Executive Vice President of Research & Development, focusing on the development of a data custodian platform for consumers and enterprises, and recently left the bank to start his own company to accelerate this mission.

“We have made great strides towards digital inclusion globally by connecting people through the Internet, but we have a long way to go before we can claim success,” says Alamouti. “We need to create a sustainable business model to make Internet access affordable to every citizen of the world, but more importantly provide them control of their data, and create disruptive new business models that disincentivize the spread of misinformation, ignorance, and superstitions.

“This will bring people together, provide opportunities to close the growing wealth gap, and ensure a sustainable future for all. I’m incredibly honored to become a Marconi Fellow and work with an organization that has dedicated itself to digital inclusion. I could never have imagined that one day I would share this honor with other Marconi Fellows, world-renowned luminaries whom I have looked up to and admired throughout my career.”

Born in Iran, Alamouti began his undergraduate studies at the Sharif University of Technology in Tehran but left the country following the Islamic Cultural Revolution of 1979. The new government had expelled him from the University and labeled him an apostate due to his progressive secular views. Alamouti escaped to Spain and eventually became a political refugee in Canada in 1984, where he studied electrical engineering at the University of British Columbia during the early days of wireless technology. Now a citizen of Canada and the United States, he credits his challenging young adulthood with the philosophy that continues to shape his career: do the right thing, all the time.

“It’s an honor to celebrate Siavash’s astounding career with the 2022 Marconi Prize,” says Samantha Schartman-Cycyk, the organization’s Executive Director. “His integrity, vision for the role of technology in society, and leadership at the forefront of communications earn him a place among the founders of our connected world.”

Siavash Alamouti’s foundational contribution to wireless technology is the Alamouti Code, which has inspired tens of thousands of researchers to expand on his findings. This breakthrough solution was adopted in 3GPP standards only two years after its invention and is included in all the wireless standards since 3G (LTE, LTE-Advanced, and 5G), and all WiFi standards since 802.11n (802.11ad, 802.11ay, etc.).

Billions of devices in use today rely on the Alamouti code to ensure better quality of communication at lower cost and reduced energy usage. His innovation has improved communications for billions of people and millions of companies and enterprises without any detrimental effect on the carbon footprint.

Alamouti was one of the key contributors to changes in spectrum policy in the U.S. and globally to open the doors for the use of MIMO technology, a major enabler for modern wireless systems. He was and continues to be a vocal advocate of open wireless standards, founding the Wireless Gigabit Alliance (WiGig Alliance) to bring together leaders from competing technology giants like Apple, Broadcom, Huawei, Intel, Microsoft, Samsung, and Sony. His leadership can be seen in the development of 5G and LTE standards, which ensure lower costs and better service by enabling interoperability and a robust market of suppliers.

“Beyond the technology leadership and personal charisma, the great passion that drives Siavash is the benefit that technology can bring to people, especially in developing countries, and his desire to democratize broadband access anywhere,” writes Izik Kirshenbaum, founder and chairman of Siklu Inc. and former Intel colleague.

Throughout his career, Alamouti has championed technologies that have expanded the possibilities and benefits of technology on humankind. Since 2014, he has dedicated himself to cloud decentralization, a core requirement for an open Internet. At mimik, he led the development of the first hybrid edge cloud platform, which promises to help consumers and enterprises take control of their data while making the cloud more open and efficient.

Alamouti’s interest in decentralization is two-fold: he wants consumers to be the stewards of their own data, and he wants to fix what he sees as a broken business model. He warns of the serious socioeconomic consequences of Internet-based companies prioritizing advertising over user interests.

“Siavash’s invention of the first space-time code, his championing of an open standard for worldwide broadband access, and his work to decentralize the cloud have profoundly impacted the wireless networks and devices ubiquitous today,” says Andrea Goldsmith, Chair of the Marconi Prize Selection Advisory Committee. “As a role model to future generations of communication technologists, he is profoundly deserving of the Marconi Award.”

About the Marconi Prize

The Marconi Prize is the flagship award of the Marconi Society, given annually to innovators who have made significant contributions to increasing digital inclusivity through the advancement of information and communications technology. Marconi Prize recipients are recommended by an independent selection committee and approved by the Marconi Society Board, which is chaired by Vint Cerf and includes communications pioneers such as Federico Faggin, Sir David Payne and Andrea Goldsmith.

About the Marconi Society

The Marconi Society envisions a world in which everyone can create opportunity through the benefits of connectivity. The organization celebrates, inspires, and connects individuals building tomorrow’s technologies in service of a digitally inclusive world.